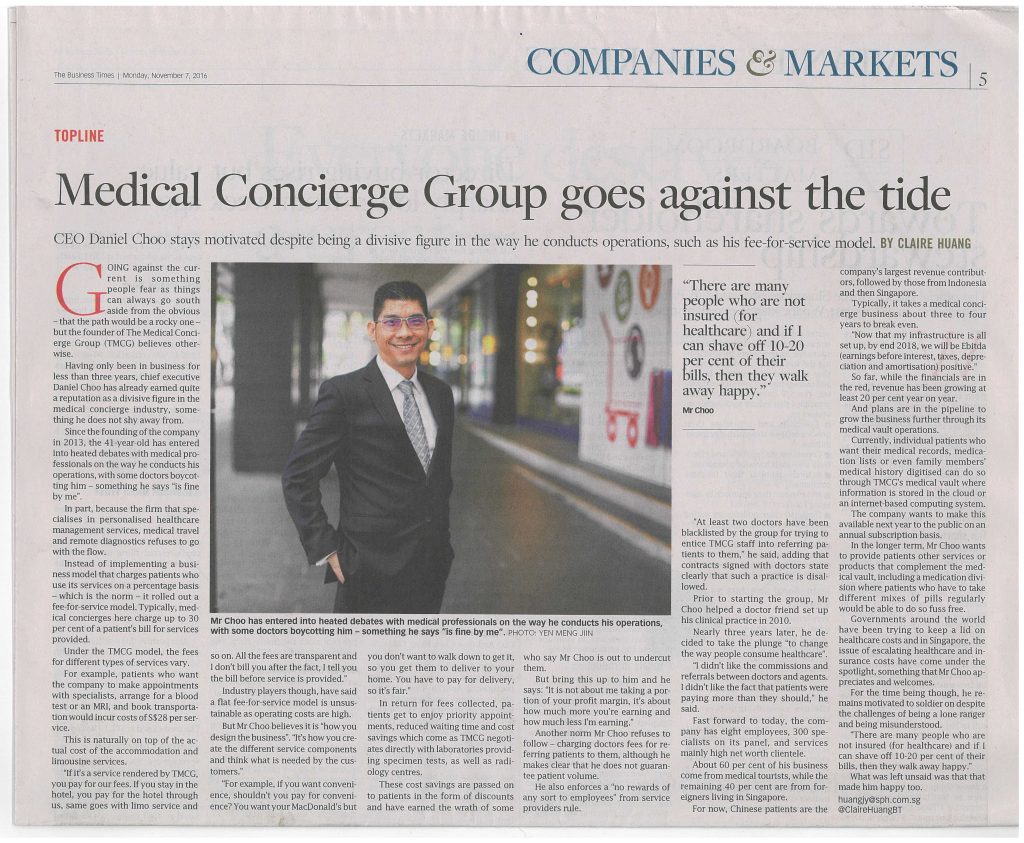 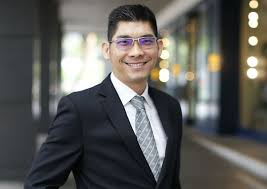 GOING against the current is something people fear as things can always go south aside from the obvious – that the path would be a rocky one – but the founder of The Medical Concierge Group (TMCG) believes otherwise.

Having only been in business for less than three years, chief executive Daniel Choo has already earned quite a reputation as a divisive figure in the medical concierge industry, something he does not shy away from.

Since the founding of the company in 2013, the 41-year-old has entered into heated debates with medical professionals on the way he conducts his operations, with some doctors boycotting him – something he says “is fine by me”.

In part, because the firm that specialises in personalised healthcare management services, medical travel and remote diagnostics refuses to go with the flow.

Instead of implementing a business model that charges patients who use its services on a percentage basis – which is the norm – it rolled out a fee-for-service model. Typically, medical concierges here charge up to 30 per cent of a patient’s bill for services provided.

Under the TMCG model, the fees for different types of services vary.

For example, patients who want the company to make appointments with specialists, arrange for a blood test or an MRI, and book transportation would incur costs of S$28 per service.

This is naturally on top of the actual cost of the accommodation and limousine services.

“If it’s a service rendered by TMCG, you pay for our fees. If you stay in the hotel, you pay for the hotel through us, same goes with limo service and so on. All the fees are transparent and I don’t bill you after the fact, I tell you the bill before service is provided.”

Industry players though, have said a flat fee-for-service model is unsustainable as operating costs are high.

But Mr Choo believes it is “how you design the business”. “It’s how you create the different service components and think what is needed by the customers.”

“For example, if you want convenience, shouldn’t you pay for convenience? You want your MacDonald’s but you don’t want to walk down to get it, so you get them to deliver to your home. You have to pay for delivery, so it’s fair.”

In return for fees collected, patients get to enjoy priority appointments, reduced waiting time and cost savings which come as TMCG negotiates directly with laboratories providing specimen tests, as well as radiology centres.

These cost savings are passed on to patients in the form of discounts and have earned the wrath of some who say Mr Choo is out to undercut them.

But bring this up to him and he says: “It is not about me taking a portion of your profit margin, it’s about how much more you’re earning and how much less I’m earning.”

Another norm Mr Choo refuses to follow – charging doctors fees for referring patients to them, although he makes clear that he does not guarantee patient volume.

He also enforces a “no rewards of any sort to employees” from service providers rule.

“At least two doctors have been blacklisted by the group for trying to entice TMCG staff into referring patients to them,” he said, adding that contracts signed with doctors state clearly that such a practice is disallowed.

Prior to starting the group, Mr Choo helped a doctor friend set up his clinical practice in 2010.

Fast forward to today, the company has eight employees, 300 specialists on its panel, and services mainly high net worth clientele.

About 60 per cent of his business come from medical tourists, while the remaining 40 per cent are from foreigners living in Singapore.

For now, Chinese patients are the company’s largest revenue contributors, followed by those from Indonesia and then Singapore.

Typically, it takes a medical concierge business about three to four years to break even.

“Now that my infrastructure is all set up, by end 2018, we will be Ebitda (earnings before interest, taxes, depreciation and amortisation) positive.”

So far, while the financials are in the red, revenue has been growing at least 20 per cent year on year.

And plans are in the pipeline to grow the business further through its medical vault operations.

Currently, individual patients who want their medical records, medication lists or even family members’ medical history digitised can do so through TMCG’s medical vault where information is stored in the cloud or an internet-based computing system.

The company wants to make this available next year to the public on an annual subscription basis.

In the longer term, Mr Choo wants to provide patients other services or products that complement the medical vault, including a medication division where patients who have to take different mixes of pills regularly would be able to do so fuss free.

Governments around the world have been trying to keep a lid on healthcare costs and in Singapore, the issue of escalating healthcare and insurance costs have come under the spotlight, something that Mr Choo appreciates and welcomes.

For the time being though, he remains motivated to soldier on despite the challenges of being a lone ranger and being misunderstood.

“There are many people who are not insured (for healthcare) and if I can shave off 10-20 per cent of their bills, then they walk away happy.”

What was left unsaid was that that made him happy too.